So, being the nerd that I am, I watch a lot of documentaries. Especially ones on World War II. I have often wondered if the Nazi regime could have won the war if they hadn’t spent so much money and man power on the concentration camps, rounding up people into the camps and on Hitlers train. I know the last one sounds a little strange, but when I learned about it, it certainly seemed like it could have been money spent better elsewhere. But it also shows the level of paranoia that Hitler reached.

Why Did He Want a Train?

January 30, 1933 Hitler was elected to the German Chancellery and as he was crisscrossing Germany on his political campaign, he learned that Benito Mussolini had his own train. It would be a way for him to move across the Reich in comfort and safety, so in 1937 he commissioned the Germany Railway to build it for him. So, before he launches into war with the rest of the world, he builds his own private train.

The train took two years to complete and was massive! With each car weighing at least 60 tons, it took two locomotives just to pull it. It was equipped with the latest in technological advances, could carry up to two hundred people between the 10-16 cars that made up the train, and he named it Amerika. Why Amerika? Because he was fascinated by the American decimation of its native Indian population.

The train was absolutely massive in size. The train in its entirety was 1,200 tons and over 430 meters long, it was the Air Force One of its day and could travel at over 120 Kph.

It was pulled by two locomotives, that each took eight hours to prep for any journey Hitler may have wished to undertake. It took heating 27,000 liters of water to generate enough steam to power the locomotives. They were not good for long distances and if Hitler traveled more than 250-300 kilometers, the locomotive would need to be changed for a fresh one. With each locomotive consuming 7 tons of coal.

The train was equipped with two anti-aircraft cars, one in front and one in back. Each anti-aircraft car carried four guns at the front and rear of it, with the middle as living space for the soldiers who manned the guns. The living space included beds, kitchen, toilets, washroom and a magazine for arms and munitions. The specially designed anti-aircraft 20 mm guns could fire into the air at an altitude of 2.5 kilometers and then drop and fire side ways at on coming threats, with a capability of 800 rounds per minute.

There was one car specifically for Hitlers personal regiment of bodyguards from the RSD (Reichssicherheitsoienst). They were SS soldiers that would make up the only contingent of armed personnel on board the train, and there were 22-26 on board at any given time.

Along the trains route, men were posted every 100 meters, with more posted at vulnerable points such as stations, bridges and tunnels.

Security was tightly controlled on board the train. Every member of staff was carefully vetted and had to prove Aryan lineage back to 1750. There could be no trace of Jewish heritage and they had to be reliable Nazi party members. There were bomb sniffing dogs and the food was checked for poison and explosives.

Nazis were obsessive about Hitlers security and used an entire regiment of SS and Wehrmacht just to guard the train, each car and the route of the train.

The train was to be Hitlers new rolling military headquarters where he would be able to dictate Nazi policy.

While Hitlers bedroom was sparsely furnished with a single bed, his bathroom was far from spartan. Given to him as a gift for his 50th birthday on April 20, 1939 by the Reichbahn, the 78-ton car was richly adorned. With marble baths and floors, the car had to have a special cement floor poured just to support the interior furnishings of the car. It consisted of five marble and enameled steel bath tubs, three marble shower stalls, a barber area and an 11,200-liter water tank. It was the ninth car from the front of the train and the most heavily guarded with two guards stationed at each end of the car.

Hitlers private Mercedes followed the train, driven by his chauffer. A Focke Wulf 200 Condor aircraft flew ahead of the train to eliminate any threats on the ground or in the air.

Having his own train allowed Hitlers full war cabinet to be with him at all times. At different points in time Petain of France, Mussolini of Italy and Franco of Spain all rode in the train. 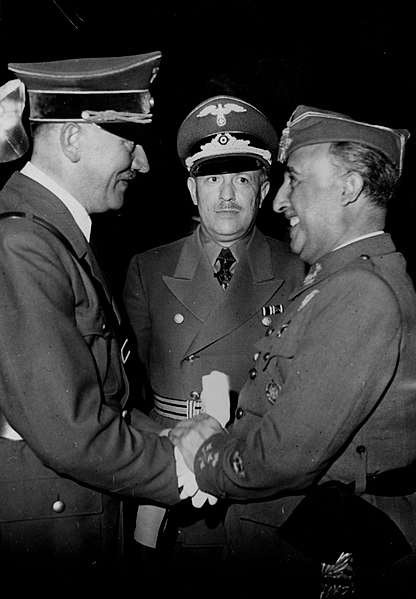 Hitler Tours the Train and the End of the Line

Throughout 1940 Hitler used the train to go through the conquered countries that were now part of the Third Reich. June 22, 1940, he takes the train to France to accept the surrender of France, at the same place and in the same railcar that Germany signed the 1918 Armistice. When he returns to Berlin on July 6 of that year, he is welcomed by a giant crowd and has now been elevated to cult like status. This is the last time that he will freely mingle with the general public.

The train was also used on a secret route through France and into Spain, the plan was to meet with General Franco and try to bring Spain into the war on the German side. Hitler takes France’s Petain with him.

Hitler returns to the Berghof where he remains until October 20, 1940 when he decides to take a three-leg trip across France. It is this journey in which he hopes to get Franco to ally with Germany. Security is extremely tight. SS security forces are sent ahead to secure the train stations. Train stations were Amerika was to stop were given last minute notification of its arrival, they would then have to re-route all other trains coming in. The trains would be stopped or parked on a side line of the track until Amerika left the station. French railroad workers were forced to stay in work sheds until Amerika continued on its route, as they were not allowed to be on the station platforms.

All bridges and tunnels along the route had to be checked for explosives, decoy trains could be sent 20-30 minutes ahead of Amerika or sent after Amerika had left the station. There is not a lot that survives documenting the route, timetable and notes of the journey as all documentation was destroyed at the end of each day.

October 22, 1940 Amerika arrives in Montoire-sur-le-Loir so that Hitler can meet with French Vichy president Petain, who Hitler takes with him to meet with Franco. Five hundred German soldiers arrived in the town early to secure the area for Hitlers arrival.

October 23, 1940 the train arrives in Hendaye, a town on the French/Spanish border to meet with General Franco. They meet for nine hours and Franco declines to align with the Germany war machine.

By the end of the war Hitler is not the only one with a special private train, there were over 25 “special” trains for Hitlers ministers and generals. By the early 1950’s train cars from various “special” trains were returned to West Germany. West German chancellor Konrad Adenover used some of the cars to make up his own personal train that he used to go to Moscow in 1955.

In the 1960’s Queen Elizabeth II and the Beatles used the private train car of Hitlers minister of transport to tour through Germany. The 1970’s see the last use of the train cars from Hitlers train, when German chancellor Willy Brandt uses them, by the 1980’s the few remaining cars sit collecting dust in the back of a museum.

Most people agree that Hitler was a sadistic, dictator who ruled by his hatred of the Jews, Roma’s, homosexuals and many other groups of people, yet he didn’t mind taking their money and using it for things such as his special train. The Nazi regime is full of contradictions. But you have to wonder, would the war have had a different outcome if the money and man power put into the trains, the security for the trains, and the concentration camps. It certainly would have put more men at his disposal instead of the old men and boys he used to defend Berlin in its last hours. Hitler was an egomaniac of the highest degree and people followed him. We now have to ask ourselves “why?”. And we have to avoid repeating those same mistakes again, at all costs.

I hope that you have enjoyed learning about Hitlers train and maybe wondering “what if?” about it. I look forward to seeing you again in two weeks. Please share this blog and/or follow it.